The focus on oil and gas projects, arising from the Economic Transformation Programme, will create a more dynamic and progressive oil and gas industry in Malaysia. Malaysia companies will be able to partake with local and foreign investors to invest in new technologies, new products as well as create countless job opportunities as several of these petrochemical projects take off in the near future.

The Pengerang Integrated Petroleum Complex (PIPC) is one big step in creating value to the downstream oil and gas value chain in Johor. Sited in Pengerang, it is one of the largest pieces of investments in the Pengerang district and located on a single plot measuring about 20,000 acres. The project will house oil refineries, naphtha crackers, petrochemical plants as well as a liquefied natural gas (LNG) import terminals and a regasification plant. 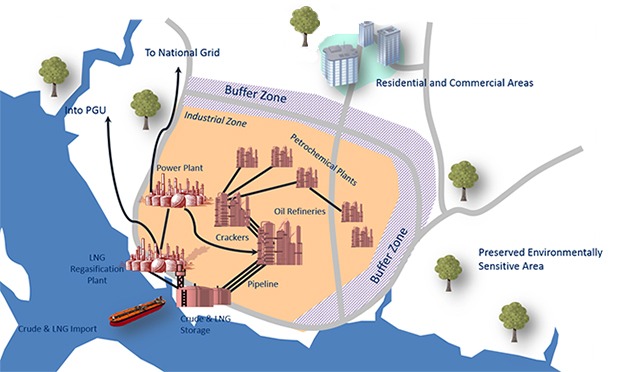 In PIPC, oil refining facilities will add value to imported crude oil via the Pengerang Deepwater Terminal (PDT). New high-value, high-demand products and by-products, such as polymers, pharmaceutical products and plastics, will be created from the refined feedstock. In creating these products, Malaysia's petrochemical complexes will be able to generate greater value and investments from its oil and gas sector.

Strategic Location at the South - East tip of Peninsular Malaysia

As of January 2013, two major catalytic projects have been committed within the PIPC area. The RM5 billion Pengerang Deepwater Terminal (PDT) is a joint-venture between DIALOG Group of Malaysia, Royal Vopak of Netherlands and Johor State Secretary Incorporated (SSI).

The second mega-project within PIPC is PETRONAS RM53 billion Refinery and Petrochemical Integrated Development (RAPID) Project while the associated facilities will involve another RM36 billion in investment. The RAPID project site preparation is in progress and is expected to be commissioned by 2019. RAPID will have a 300,000 bbl. per day refining capacity while additional petrochemical plants will generate value to petroleum products produced in RAPID.

To ensure that various oil and gas projects within PIPC and storage hubs in all 3 key areas are managed and administered efficiently, a new dedicated Federal Government agency - Johor Petroleum Development Corporation (JPDC) - was created as subsidiary to MPRC. JPDC's main role is to coordinate the development of PIPC as well as a one-stop information centre to assist investors, oil and gas players and local community.

JPDC's Board of Directors is well represented by both the Malaysian Federal Government and Johor State Government to align government's efforts in making PIPC a success. One of the crucial roles for the government is to put in infrastructure and utilities in Pengerang, Kota Tinggi District to cater for the future expansion needs once PIPC is in place. These include construction of new roads, installing a comprehensive network of power, telecommunications and water supplies, upgrading roads to highways to facilitate movements of goods and services and a centralised management of industrial waste products from the complex.